I'm not sure if a gypsy's eyes are like Patti Ecker's, but I wouldn't be surprised. Gypsies are reputed to have a rascal's heart and when I see the picture on the back of the CD cover, I see rascal and maybe a bit more. The smile is wide, the eyes are mischievous and there is no doubt in my mind that she could emasculate every man-jack of us in a fell swoop. Well, maybe not, but there is likely more than a little drama in Patti Ecker because there sure is in her music.

I envision Ecker in a smoky lounge or on (or off) Broadway because she has a big voice, made for those venues. Of course, I'm influenced by her cover of Put the Blame on Mame. I can see in my mind's eye Ecker strutting across a stage, feather boa twirling and flipping while she vamps her way through the song, big time, before taking on Mame's dramatic eccentricities. Ecker can act, too. I know she can. You can't perform the song that well without being able to act, can you?

Regardless, I know what she can do. She can write songs. The blues and jazz are buried deep within her, and maybe that is why she has that aura of the stage. It's not just the standard blues and jazz, either. She toys with '20s ragtime and dixieland with Okay For You (Hollywood's conception of F. Scott Fitzgerald screens on my inner eyelids every time I hear it), You Missed Her visits the Carribean ('50s style), musical theater loves songs like the jazzy Too Close, Too Soon (let's face it, you have to love a song which rhymes "moon" and "June" without making you cringe), and there's my personal favorite, Baby's Got the Blues. Ecker pulls out the stops on this one and surrounds herself with just the right amount of blues and jazz, and let's hear it for the ensemble. Even on the '50s-influenced Gypsy Lover's Eyes, they have the touch.

Yes, let's hear it for the ensemble. Ecker gathered some really fine musicians to help her with this. Rocco Phipps and Marc Edelstein are outstanding on the upright bass, Gordon James floors me with his jazz piano, Steve Doyle slides on that guitar, and, and… I like it better when artists use a finite number of musicians because it's easier to pass the praise, but what the heck, let her use as many as she wants. It works, and that's what counts.

Ecker, if you're listening, take this for what it's worth. There aren't that many people out there who can embrace musical theater and make it work. I believe you can, and it would be one hell of a lot easier on you than sucking down blue clouds of smoke in some basement speakeasy. I'm sure you could do both well because you did it well here, but man, I would pay good money to see you do a couple of sets of Baby's Got the Blues tunes. If you head that direction, I'll be the one at the counter swilling down martinis with three olives. Just pour me into a cab when you're done.

Track List: * Talk To Ya, Mister * Put the Blame On Mame * Baby's Got the Blues * Elsie * Indifferent Love * The Grace of a Song * Learn To Be Lonely * Not Really Spring * Shine * You Missed Her * Too Close, Too Soon * Okay For You * Gypsy Lover's Eyes * True Love Whispers All songs written by Patti Ecker except Put the Blame On Mame (Roberts/Fisher).

CD Review: The first song on this fine set lured me in – “Talk To Ya, Mister” boasts Patti Ecker’s sassy, bluesy vocal over a groovy, countrified soul vibe. A whole bunch more of this would be cool, I thought. In the same radio-ready adult-alternative vein as “Mister,” Ecker and her tasty backing players later deliver the mellow, soulful "Shine." But Gypsy Lover’s Eyes is so much more. Ecker’s album also has a full complement of jazzy tracks, some infectious pop rockers, and a few simple acoustic numbers.

Ecker’s expressive, conversational vocal style works no matter what the genre, and she has chosen top-notch musicians. Ecker herself is a spot-on rhythm guitarist. On the jazz/standard tunes, Ecker can sound vampy (“Put the Blame On Mame,” the disc’s lone cover), vulnerable (“Baby’s Got the Blues”), gutsy (“Indifferent Love”) and jaunty (“Too Close, Too Soon”). “Indifferent” features Ecker’s charmingly dramatic vocal delivering lyrics from a bygone era, punctuated by John Otto’s bouncy clarinet. “Too Close, Too Soon” is also a fine vocal performance, this time featuring another gifted soloist, fiddler Rick Veras.

The two pop rockers are nifty fun. “Elsie” is a Cajun-style ode to an oft-misbehaved dog. This would go great on a kids’ album, especially since the lyrics are clever without being condescending. “You Missed Her” is breezy, fun, and kind of tropical, buoyed by L.J. Slavin’s dancing flute. The simple, folk-country “The Grace of a Song” and the closing “True Love Whispers” are shimmering, hopeful acoustic gems.

At the other end of the spectrum is the absolutely smoking “Learn to Be Lonely.” Ecker wails and growls her useful advice like she’s preaching hard-earned truths, and Steve Doyle nails his slide guitar riffs.

“Okay For You” and “Gypsy Lover’s Eyes” are also worth noting because they are so darned infectious “Okay” sounds like Bourbon Street, with Ecker strumming like a Dixieland banjoist. And “Gypsy” begins with Louise Brodie’ mournful violin and turns into a poppy treat with vocals that remind me of a ‘50s- or early ‘60s-style girl group.

Patti Ecker is a gifted songwriter in many styles, and a singer who can tackle any kind of song. (She also does brilliant work on her own background vocals). On Gypsy Lover’s Eyes, Ecker and her accompanying players confidently take us on a tour of many of the traditional styles that mesh into the modern Americana genre.

Best Songs: Talk To Ya Mister, Indifferent Love, Elsie, Learn To Be Lonely 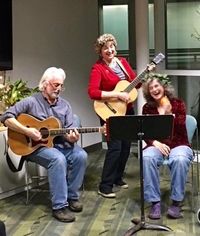 SMALL POTATOES is playing a real LIVE, in the flesh, CONCERT this SATURDAY, SEPT 3rd, in DeKALB IL at the "FARGO VENUE", 641 E. Lincoln Hwy (Rt 38), starting at 7:00pm. This is the very first of the “1st SAT. CONCERTS” put together by Dave DK Kolar. We are sharing the evening with our dear friend PATTI ECKER (the other person in the picture who is not Jacquie or Rich). This will be a sort of adventure for all of us since 641 E. is actually a Skateboard Shop with a very cool Skateboard Park right behind. But fear not, just to the RIGHT of that (645?) is a big, lovely room with a gorgeous blue floor that really wants to be filled with friends and music. So come on out to DeKalb on Saturday and ... LET THE GOOD TIMES ROLL!

A Bit of Blarney

Patti Ecker - A Bit of Blarney

St. Patrick’s Day Songs, including MacNamara’s Band, Danny Boy, and an Irish lullaby or two. Plus, pub songs like The Unicorn, and a tall tale about a wee Leprechaun and his pot of gold! With guitar, banjo, spoons and Irish drum.

Jeremy A. Shreckhise of Shreckman Design.